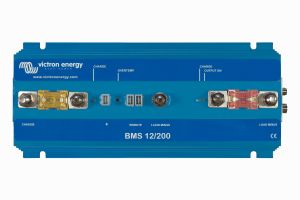 Why a Battery Management System (BMS) is needed:
• A LFP cell will be damaged if the voltage over the cell falls to less than 2,5V
• A LFP cell will be damaged if the voltage over the cell increases to more than 4,2V. Lead-acid batteries will eventually also be damaged when discharged too deeply or overcharged, but not immediately. A lead-acid battery will recover from total discharge even after it has been left in discharged state during days or weeks (depending on battery type and brand)
• The cells of a LFP battery do not auto-balance at the end of the charge cycle.
The cells in a battery are not 100% identical. Therefore, when cycled, some cells will be fully charged or discharged earlier than others. The differences will increase if the cells are not balanced/equalized from time to time.
The differences between cells may become some so extreme over time that, even though the overall battery voltage is within limits, some cells will be destroyed due to over- or under-voltage.
A LFP battery therefore must be protected by a BMS that actively balances the individual cells and prevents under- and over-voltage.

A 12V BMS that protects the alternator (and wiring), and supplies up to 200A in any DC load (including inverters and inverter/chargers)

Alternator/battery charger input (Power Port AB)
• The first function of Power Port AB is to prevent the load connected to the LFP battery from discharging the starter battery. This function is similar to that of a Cyrix battery combiner or Argo FET battery isolator. Current can flow to the LFP battery only if the input voltage (= voltage on the starter battery) exceeds 13V
• Current cannot flow back from the LFP battery to the starter battery, thus preventing eventual damage to the LFP battery due to excessive discharge
• Excessive input voltage and transients are regulated down to a safe level
• Charge current is reduced to a safe level in case of cell unbalance or over temperature
• The input current is electronically limited to approximately 80% of the AB fuse rating. A 50A fuse, for example, will therefore limit the input current to 40A

Choosing the right fuse will therefore:
a. Protect the LFP battery against excessive charge current (important in case of a low capacity LFP battery).
b. Protect the alternator against overload in case of a high capacity LFP battery bank (most 12V alternators will overheat and fail if running at maximum output during more than 15 minutes).
c. Limit charge current in order not to exceed the current handling capability of the wiring.

The maximum fuse rating is 100A (limiting charge current to approximately 80A).

Load/battery charger output/input (Power Port LB)
• Maximum current in both directions: 200A continuous
• Peak discharge current electronically limited to 400A
• Battery discharge cut- off whenever the weakest cell falls below 3V
• Charge current is reduced to a safe level in case of cell unbalance or over temperature